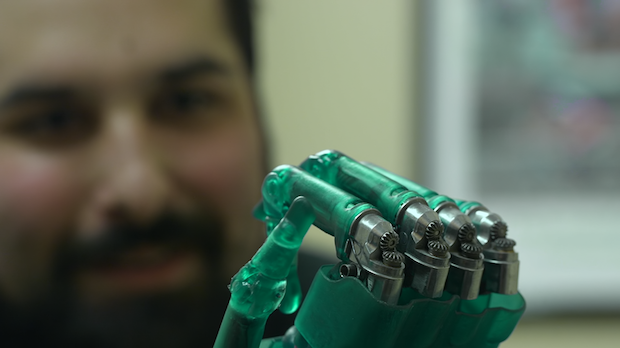 Four Formlabs Form 2 3D printers make up the production facility, allowing design, prototyping and manufacturing to happen all in the same space. A General Electric software engineer is aiming to make a global impact with 3D-printed custom prosthetic hands after fitting his first patient at the end of 2016.

A General Electric software engineer is aiming to make a global impact with 3D-printed custom prosthetic hands after fitting his first patient at the end of 2016.

Lyman Connor was inspired to begin the project after a chance meeting with a young boy in a hospital who was born with part of his hand missing. Connor, who had been involved in a serious bicycle accident, then learned a prosthetic hand cost up to $50,000. According to the Amputee Coalition of America, over 60,000 people a year in the US lose an upper limb, only half of those using prosthesis.

“I was captivated by the cost of $50,000 for a prosthetic hand,” Connor said. “The device does not need to be that expensive. Who’s to tell someone that you can’t get a leg or an arm? You’re already adding insult to injury. My goal was (to) design something that has all the same capabilities as the $50,000 hands at a fraction of the price.”

Sean O’Connor was the first person to be fitted with one of Connor’s bionic prostheses. Born without his whole lower arm, Sean had been fortunate enough to warrant a prosthetic limb through his health insurance. Since Sean never felt comfortable with his first prosthetic hand, he agreed to have one custom made by Connor.

Such is the success of O’Connor’s prosthetic hand, the GE software engineer is now looking to upscale the project and make a much bigger impact.

“I always just found (prosthetic hands) frustrating,” Sean said. “When I first met Lyman, I thought it was really cool that he was actually trying to help and make a difference. It’s very exciting to be a part of something that’s actually trying to advance current prosthetics. Compared to my first hand, this one is already a lot more comfortable (and) it’s lighter.”

Connor decided in the early stages of the project that he was going to use 3D printing to produce prototypes of his bionic hand. But, since his aim was to build a cost-effective prosthesis, his mind was changed to produce custom parts in volume. He used a FormlabsForm 2 3D printer and linked up with Eduardo Salcedo, a researcher in the mechanical engineering department at Indiana University – Purdue University Indianapolis.

Initially, Connor had considered injection moulding techniques to produce the hand, but after some cost analysis, 3D printing turned out to be the most cost-effective. Four Form 2 3D printers made up the production facility, allowing Connor to design, prototype and manufacture all in the same space.

“Eduardo came into the project to modify and perfect all the cosmetics for the hand and to help me get the hand to a level where it was going to be production ready,” said Connor.

As Salcedo also had a Form 2 printer, the pair seamlessly collaborated on designs. He was able to structure the design so that custom models for different patients could be easily achieved in the future.

“When I first started working with him, he had a rough version of what his vision was,” remembered Salcedo. “What I ended up doing was separating all those different components and then in the future, we’re able to change the dimensions and make a completely different version for every specific patient.”

When the project first began, Connor was only working to provide a hand for one patient. Such is the success of O’Connor’s prosthetic hand, the GE software engineer is now looking to upscale the project and make a much bigger impact.

“The initial concept was to help one person, and Sean, through his willingness to help has opened up the door for us to support and help people all over the world,” Connor summarised. “Just because you may want a prosthetic hand, doesn’t mean that you’ll qualify for it even if your insurance will pay.

“I want to make something affordable and change the whole demographics of who can afford these hands. The whole idea is to go global and make a positive impact.”