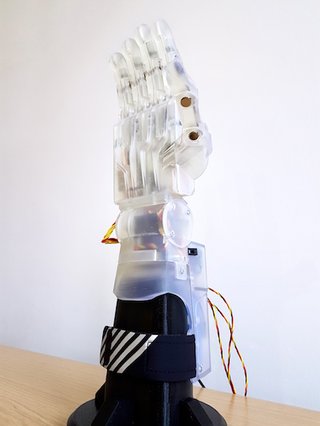 The design won an award at the Industry 4.0 Summit and Factories of the Future Expo.

A group of University of Manchester students have produced a 3D printed robotic prosthetic hand they believe could offer a viable alternative for amputees. The hand was designed and built at a cost of just £307, and was awarded ‘best new development’ in the Digital Innovation Challenge at the recent Industry 4.0 Summit and Factories of the Future Expo. Its joints are fully poseable, with each individual finger, and the thumb, able to move and make a fist, and thus carry out rudimentary, everyday tasks. The hand can be used to pick items, use a knife and fork, type and click a mouse, open doors, and play the hand-game ‘rock-paper-scissors’.

Though the functionalities of the robotic hand are comprehensive, the students believe the cost of production is the most salient feature. Advanced robotic prosthetic limbs can cost anywhere between £25,000 and £60,000, with the more affordable robotic, multi-grip functionality hands still starting at £3,000. Alexander Agboola-Dobson, Sebastien Preston-Jensen, Panagiotis Papathanasiou, Maximillian Rimmer, and Shao Hian Liew, the team behind the £307 prototype, are confident they can make their effort even cheaper than it currently is. The group used stereolithography (SLA) to build the prototype, but say they will eventually look towards Fused Deposition Modelling (FDM), as they aim to maintain quality but reduce cost.

“Not only do we want to make it affordable, we want people to actually like the look of it and not be ashamed or embarrassed of using or wearing it,” Agboola-Dobson, Project lead and lead design engineer, commented. “Some traditional prosthetics can both look and feel cumbersome or, those that don’t, are extremely expensive. We think our design really can make a difference and we will be looking to commercialise the project in the future.”

In the UK alone, around 6,000 major limb amputations are carried out every year. Typically, non-robotic prosthetic limbs available via the NHS are either purely cosmetic, or plastic-moulded limbs with hooks. The team wanted a more futuristic, life-like design, and so looked to incorporate Bluetooth connection and develop an Android smartphone app. Their hand is controlled by muscle sensors which are placed on the wearer’s arm and paired to the app. Functionality is customised through the app, while the muscle sensors provide the control by moving the hand whenever necessary.