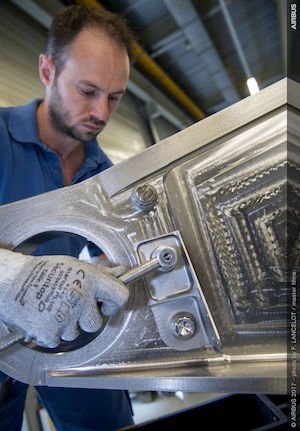 Aircraft manufacturer, has installed a 3D printed titanium bracket on its series production commercial aircraft, the A350 XWB. The part was produced by Arconic, an advanced manufacturing and engineering company, who has struck a partnership with Airbus to additively manufacture components for its latest widebody aircraft.

This installation is resultant of that partnership, and represents the first 3D printed component to be implemented on an Airbus commercial aircraft. It comes after a series of installations of similar parts on test aircraft. The partners believe this is a significant step, and have hinted on what’s to follow, revealing that a number of complex 3D printed parts, such as cabin brackets and bleed pipes, have already been flown on Airbus A320neo and A350 XWB test aeroplanes.

“Arconic is proud to partner with Airbus to advance aerospace additive manufacturing,” said Jeremy Halford, President of Arconic Titanium and Engineered Products. “Our comprehensive capabilities, from materials science leadership to qualification expertise, helped make this achievement possible. We look forward to continuing to advance the art of the possible in additive for aerospace.”

Airbus has been a trailblazing company in the adoption of 3D printing and 3D printed parts for the aerospace industry. In addition to Arconic, Airbus has also aligned itself with Stratasys, who in 2015 revealed more than 1,000 3D printed parts were manufactured for the A350 XWB, and the company’s Direct Manufacturing subsidiary to print parts in ULTEM 9085 for the same aircraft. Other partnerships with 3D printing leaders include one with Materialise which was announced in 2015 and one with Sciaky in December 2016.