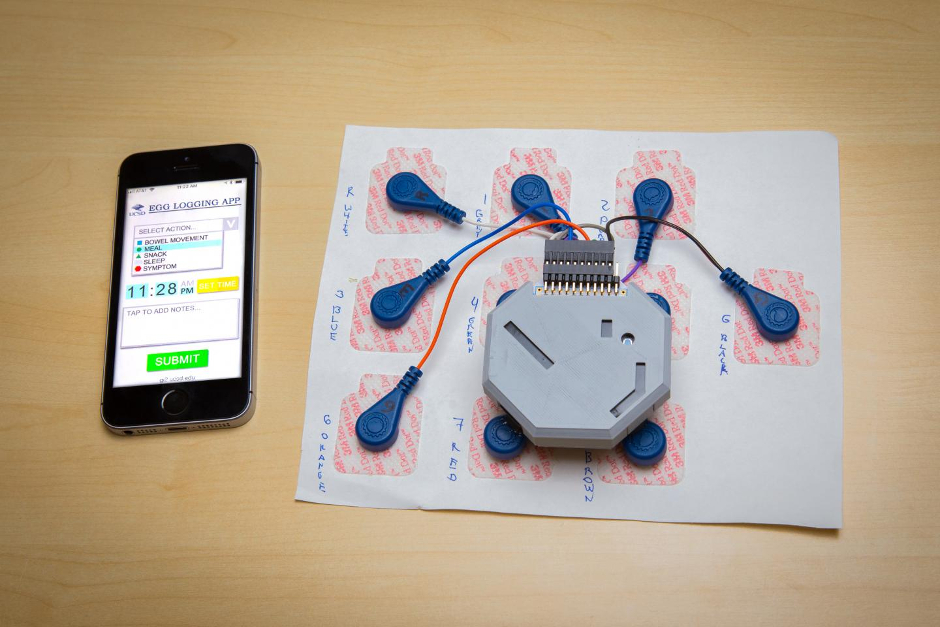 Researchers have developed a wearable, non-invasive system to monitor electrical activity in the stomach over 24 hours, an advance with potential benefits for patients and gastroenterologists. Applications include the monitoring of gastro-intestinal (GI) tract activity for patients outside clinical settings, and increasing the likelihood of identifying anomalies. Researchers detail their findings in Scientific Reports.

The device, a 3D printed portable box connected to 10 small wearable electrodes, was tested on 11 children and one adult volunteer.

They found that data collected with the wearable system were comparable to methods used in the clinic, which can include the invasive procedure of inserting a catheter through the patient’s nose. They also found that the stomach’s electrical activity changes not only around meals, but also during sleep, following its own circadian rhythm.

“We think our system will spark a new kind of medicine, where a gastroenterologist can quickly see where and when a part of the GI tract is showing abnormal rhythms and as a result make more accurate, faster and personalised diagnoses,” said Armen Gharibans, the paper’s first author and a bioengineering postdoctoral researcher at the University of California San Diego.

“Until now, it was quite challenging to accurately measure the electrical patterns of stomach activity in a continuous manner, outside of a clinical setting,” said Todd Coleman, the paper’s corresponding author and a UC San Diego professor of bioengineering. “From now on, we will be able to observe patterns and analyse them in both healthy and unwell people as they go about their daily lives.”

Physicians involved with the study said the device meets an unmet clinical need.

“This will help us determine if the stomach is functioning properly during meals and – most importantly – when patients are experiencing symptoms such as nausea and belly pain,” said Dr David Kunkel, one of the paper’s co-authors and a gastroenterologist at UC San Diego Health. The system and its accompanying app

To overcome this, a sophisticated algorithmic pipeline was developed that can clean up the data and separate out abdominal muscle activity, heart beats and gastric activity, into different bands of signals that do not overlap.

The device uses off-the-shelf electrodes used in electrocardiograms. The electronics and battery are encased in a 3D printed box and connected to the electrodes, which fit on a person’s abdomen just over the stomach.

The researchers worked with Dr Hayat Mousa and tested the device on 11 paediatric patients at Rady Children’s Hospital in San Diego. These patients had been undergoing an invasive procedure called manometry, which is a clinical ‘gold standard’ for objectively monitoring GI tract activity. The procedure requires using a catheter inserted through the nose to measure pressure at several points inside the stomach. Comparing the two methods showed that data collected by the wearable device was robust and reliable.

The system is currently paired with a smart phone app that allows patients to log their meals, sleep and other activities. The long-term goal is to design an app that would allow patients and physicians to see the data collected by the device in real time.

GI problems, such as delayed emptying of the stomach, are common in patients with diabetes and Parkinson’s. This technology could improve the management of these conditions.