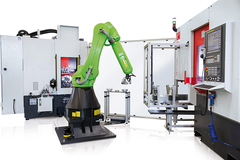 The combination of the Maxxmill 400 5-axis CNC milling centre including Heidenhain TNC 620 control (left picture) with the VT260 vertical processing centre including Fanuc 31i control fulfils the requirements placed on the production of typical parts of pumps, electric motors, control gears in the non-automotive area as well as gear parts in the automotive sector.

Both EMCO machines are connected by FANUC’s collaborative robot.  Due to the intelligent use of safety installations in combination with the collaborative robot, the system does not require any rigid fencing or access barriers.  The robot strictly traverses with industry speed (750 mm/s).

As soon as the safety space is entered (e.g. for operating tasks at the machine tools), the robot automatically switches over to the collaborative mode (250 mm/s).  The advantage is that the entire system keeps on running during this procedure. Human, automation unit and production machine can thus fulfil their tasks at the same time, together and next to each other.

The robot can be operated (moving, programmes, I/O monitoring, alarms) with FANUC’s ‘robot connection’ function or via the VT260’s operating panel.  The intelligent connection between robot control and machine control is made via the FANUC FL-Net interface.  A similar solution is also possible using a KUKA robot and a SIEMENS Sinumerik control equipped with Run MyRobot function.

Thanks to the use of the machine that is best suited for the respective type of processing in combination with the advanced human-machine-interaction and intelligent communication between the machines, the systems addresses several Industry 4.0 issues at once.