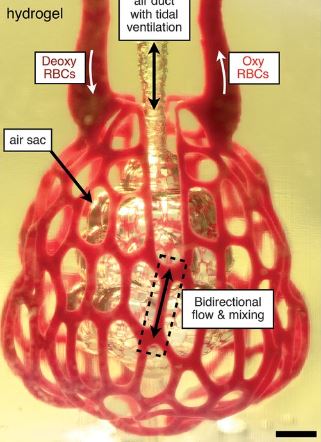 As the techniques of additive manufacturing (better known as 3D printing) develop, bioengineers have been increasingly interested in the possibility of using it to manufacture replacement organs out of cultured cells, which could considerably ease pressures on demand for transplant organs, and also reduce the risk of rejection if the patient’s own cells are used as the raw material.

A major roadblock in development of these techniques has been the production of the network of vessels which supply and circulate blood, lymph, air, and other fluids to the organs. A team at Rice University in Houston, Texas, is now claiming to have made progress towards solving this problem, as they explain a paper in Science and in the video below.

“Our organs actually contain independent vascular networks — like the airways and blood vessels of the lung or the bile ducts and blood vessels in the liver. These interpenetrating networks are physically and biochemically entangled, and the architecture itself is intimately related to tissue function. Ours is the first bioprinting technology that addresses the challenge of multivascularsation in a direct and comprehensive way,” said Jordan Miller of Rice University, who co-led the project with Kelly Stevens of the University of Washington.

The system is based on a new biological printing process known as SLATE (stereolithography apparatus for tissue engineering). This uses a hydrogel solution as its raw material, which solidifies into a hydrogel when exposed to the correct wavelength of blue light.

A digital light projector illuminates the gel from below, with a resolution of 10 to 50µm per pixel. Solidified layers are raised by an overhead arm to allow more fluid to flow in underneath and be exposed as the next layer.

The key insight for Miller and graduate student Bagrat Grigoryan was that food dyes which absorb blue light could be used as a photo absorber in the hydrogel solution, while also having the effect of confining the solidification to a very fine layer.

The team demonstrated their technique by printing a structure that mimicked the function of air sacs in the lung. Their structure showed that the printed tissues were sturdy enough to avoid bursting during blood flow and allowed a rhythmic intake and outflow of air that simulated the pressures and frequencies of human breathing.

They also showed that red blood cells flowing through a network of blood vessels surrounding the air sac could take up oxygen in a similar way to those in the lung’s alveolar air sacs.

According to Stevens, the liver is a particularly interesting target for this technique.

“The liver is especially interesting because it performs a mind-boggling 500 functions, likely second only to the brain,” Stevens said. “The liver’s complexity means there is currently no machine or therapy that can replace all its functions when it fails. Bioprinted human organs might someday supply that therapy.”