How generative design and 3D printing are making customised, lighter wheelchairs a reality

How generative design and 3D printing are making customised, lighter wheelchairs a reality 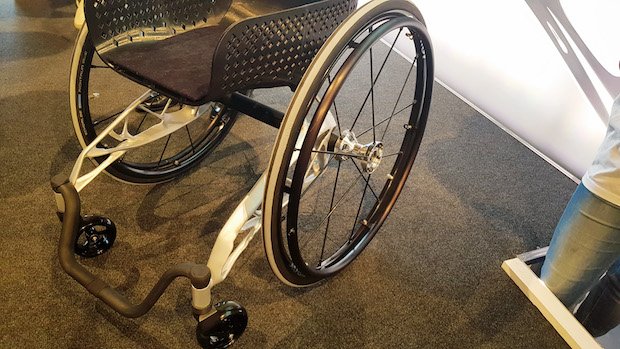 “In the same way that spectacles are a medical aid but they’ve become a fashion item – why can’t we do the same for wheelchairs?”

Under a grey cloth centre stage at Autodesk University London 2018 sat an exponent of the company’s Generative Design tools, and to its right, two champions of the technology.

Side-by-side, Rachael Wellach, founder and CEO of Disrupt Disability, and Steve Cox, 3D Tech Consultant, AMFORI Consulting, had delivered a proof of concept for the goal they had been working towards for nearly two years. As the cloth lifted, Cox introduced the audience to the world’s first generatively designed modular wheelchair.

It has everything Wellach wants in a wheelchair. Well, almost. It’s comprised of five interchangeable modules, customised in accordance to her measurements and preferences, puts the user forward and itself in the background, and the potential to be retailed under the 2,000 GBP price point of typical personalised models. It’s a step in the direction of doubling as a medical device and a fashion item, just like spectacles. All that’s left to fine-tune is the weight, which will come as metal additive manufacturing (AM) technology develops, Cox believes.

For those working on the project, the lightweighting of a wheelchair is as important as it is in the automotive and aerospace industries. It means less material usage, and less cost in both the production and shipping stages, but most importantly it makes life easier for the user. In a world where they are continually restricted, be it through accessibility, stigmatism, mobility, making life easier is Disrupt Disability’s motivation, and through a range of collaborators has the technology at its disposal to achieve that.

“I’ve been involved with Disrupt Disability for two years,” begins Cox, “and right from the very beginning I’ve had this itch I wanted to scratch of throwing Generative Design at a wheelchair to see what it could produce in terms of making something as lightweight as possible, so it takes the least amount of effort for the user to move it around. Casting into the future when metal additive manufacturing is more efficient, it will give you the opportunity to put a lattice structure inside instead of having them solid which would save more weight.” 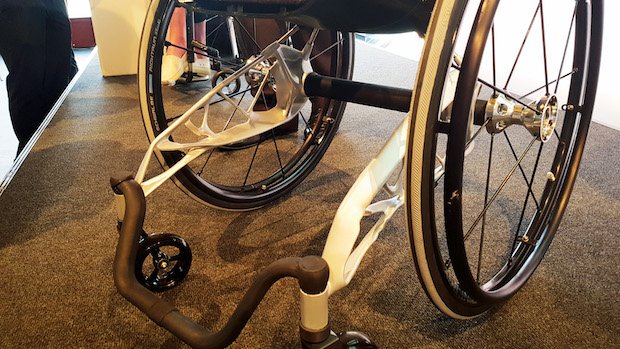 He’s mainly referring to the wheelchair’s side frames which have been CNC machined at the Autodesk Technology Centre in Birmingham. By harnessing metal AM, and implementing an internal lattice design, Cox projects weight reductions of around 40% in the future. The design of the side frames was the winner of hundreds of options thrown up automatically by Fusion 360 after variables like material and measurements were manually inputted into the software. Viewing the designs on a scatter plot, Cox was able to see which design was the most lightweight, had the best aesthetics, and was most in line with the user’s preferences, just by running his cursor over each plot.

He also ran simulations of some of the other wheelchair modules, such as the seat, which was designed inside Fusion 360’s Sculpt workspace and will be SLS printed in the future, to see how it would perform if the user leant forwards, backwards, or to the side. For Disrupt Disability, this is an important capability because an SLS seat costs 1,500 GBP, a big chunk of the organisation’s budget. The simulation capabilities not only gave the partners the confidence to print the seat, but the seamless way in which Fusion 360 enabled alterations to be made post-simulation, then update and run the simulation again, was a key part of an efficient iteration process.

This was just the first go at producing a customised modular wheelchair. Lessons have been learnt, some pieces of technology that weren’t used this time round, almost certainly will in the future. Metal 3D printing will enable lighter side frames in quicker time, while 3D scanning will return more precise measurements. “There’s no way I’m pretending this is a final product, it’s there as a thought-prompter and a discussion promoter,” remarks Cox.

Disrupt Disability was born out of a series of hackathons, taking on board the suggestions from wheelchair users and professional designers, and is aiming to serve the 70 million people worldwide who require a wheelchair, of which around 14 million feel their requirements are not met. It operates with a mantra of ‘able-bodied people don’t wear the same shoes every day, so why should wheelchair users use the same wheelchair every day?’ If the user wants to go to the beach, the wheelchair should be able to do so without its front wheels sinking into the sand. That’s why the five core modules: the seat, backrest, rear wheel axle, cast support and footrest, can all be swapped out to better suit the function at any given time.

The organisation has heeded assistance from several outlets: Cox’s consultancy has been ever-present; the hackathons helped get the ball rolling; and the likes of Salomé Bazin from Cellule and Julien Vaissieres from Batch Works helped to prototype different components of the modular system, like the front wheel casting forks, which were 3D printed for less than 30 GBP (34 EUR). With the concept now proofed, all that’s missing is the investment to help make that concept of a functional, fashionable, customised, modular wheelchair a reality.

“One of Rachael’s visions is making a wheelchair more of a wearable device, in the same way that spectacles are a medical aid but they’ve become a fashion item. Why can’t we do the same for wheelchairs?” asks Cox. “A key part of that was clearly to make a modular wheelchair that allows you to a) customise for your own preference, and b) change it on a day to day basis depending on what you are doing. I think the proof of concept shows that could potentially work.”