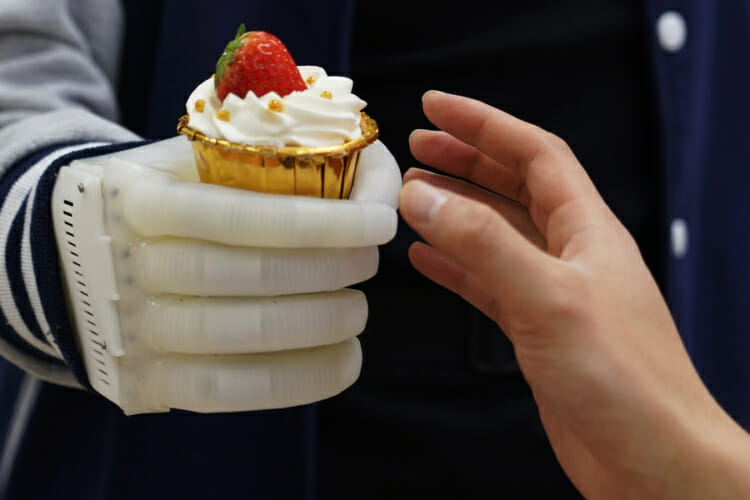 Engineers in the US and China have designed a neuroprosthetic hand that provides tactile feedback and a degree of primitive sensation in a volunteer’s residual limb.

The soft, lightweight, and potentially low-cost neuroprosthetic hand is the result of a collaboration between engineers at MIT and Shanghai Jiao Tong University.

“This is not a product yet, but the performance is already similar or superior to existing neuroprosthetics, which we’re excited about,” said Xuanhe Zhao, professor of mechanical engineering and of civil and environmental engineering at MIT. “There’s huge potential to make this soft prosthetic very low cost, for low-income families who have suffered from amputation.”

Zhao and his colleagues have published their work in Nature Biomedical Engineering.

The team’s artificial hand – made from the commercial elastomer EcoFlex – comprises five balloon-like fingers embedded with segments of fibre, similar to articulated bones in actual fingers. The digits are connected to a 3D-printed ‘palm,’ shaped like a human hand.

Rather than controlling each finger using mounted electrical motors the researchers used a pneumatic system to inflate fingers and bend them in specific positions. This system, including a small pump and valves, can be worn at the waist.

According to MIT, Lin developed a computer model to relate a finger’s desired position to the corresponding pressure a pump would have to apply to achieve that position. Using this model, the team developed a controller that directs the pneumatic system to inflate the fingers, in positions that mimic five common grasps.

The pneumatic system receives signals from electromyography sensors that measure electrical signals generated by motor neurons to control muscles. The sensors are fitted at the prosthetic’s opening, where it attaches to a user’s limb. In this arrangement, the sensors can pick up signals from a residual limb, such as when an amputee imagines making a fist.

The team then used an existing algorithm that decodes muscle signals and relates them to common types of grasp, employing it to program the controller for their pneumatic system. When an amputee imagines holding a wine glass, the sensors pick up the residual muscle signals, which the controller then translates into corresponding pressures. The pump then applies those pressures to inflate each finger and produce the amputee’s intended grasp.

To enable tactile feedback, the team stitched a pressure sensor to each fingertip. Each sensor is wired to a specific location on an amputee’s residual limb, so the user can ‘feel’ when the prosthetic’s thumb is pressed, for example, versus the forefinger.

An MIT-developed inflatable robotic hand gives amputees real-time tactile control. The smart hand is soft and elastic, weighs about half a pound, and costs a fraction of comparable prosthetics (Image: Courtesy of the researchers)

To test the inflatable hand, the researchers enlisted two volunteers who learned to use it by repeatedly contracting the muscles in their arm while imagining making five common grasps.

The volunteers were then asked to perform standardised tests to demonstrate manual strength and dexterity. These tasks included turning pages, writing with a pen, lifting heavy balls, and picking up objects like strawberries and bread.

One volunteer was able to intuitively use the soft prosthetic in daily activities, such as eating food and handling tools, such as laptops, bottles, hammers, and pliers.

In another exercise, the researchers blindfolded the volunteer and found he could discern which prosthetic finger they poked and brushed. He was also able to ‘feel’ bottles of different sizes that were placed in the prosthetic hand, and lifted them in response. The team sees these experiments as a promising sign that amputees can regain a form of sensation and real-time control with the inflatable hand.

The team has filed a patent on the design through MIT and is working to improve its sensing and range of motion.