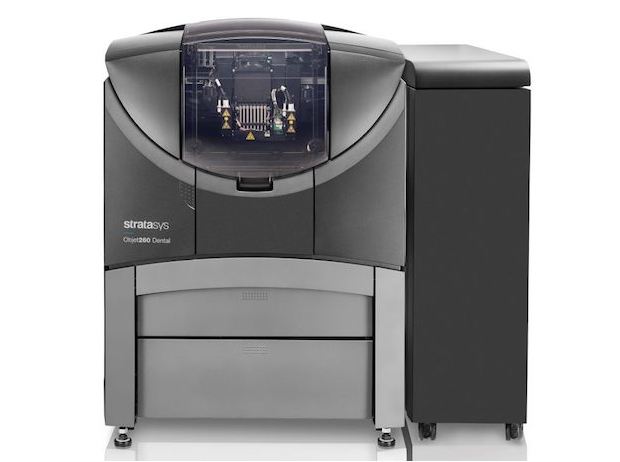 Leveraging its PolyJet triple-jetting technology, the new Stratasys Objet260 Dental 3D Printer will enable labs to print surgical guides, models, and appliances with up to three different materials on a single tray. Additionally, when in single-material mode, Stratasys claims the system will allow operators greater efficiency with shorter change-over and reduced material waste.

Though the company has not published the price of the machine, Stratasys says it will be affordable to mid-sized labs looking to expand service offerings, while not impacting versatility. If the Stratasys Objet 260 sounds familiar to you, that’s because the company launched a similar system back in 2015, the Objet260 Dental Selection 3D Printer. Though familiar in name, Stratasys confirms the specifications are very different. The new machine promises multi-material printing and increased productivity by allowing labs to print realistic models and surgical guides in a single print, whilst the Objet260 Dental Selection provides multi-material printing plus the ability to digital mix materials (colour, shore value, etc.), to print realistic implant models with soft tissue in a single build.

However, in the interest of future-proofing current investments, the Stratasys has designed its new Objet260 Dental 3D Printer to be upgradeable to “Dental Selection” to allow the use of next-generation digitally mixed materials.

“There’s no denying the power of 3D printing for digital dentistry to significantly decrease turnaround time, reduce labor costs, and provide new streams of revenue. Multi-material 3D printing pushes the boundaries of what’s possible in dentistry today, while unlocking the next-generation of applications for tomorrow,” said Mike Gaisford, Director of Healthcare Solutions at Stratasys. “We believe that today’s announcements put Stratasys at the helm of dental innovation – and now we’re placing it in the hands of more customers than ever before.” Finally, Stratasys also demonstrated a new support removal technology, Pop-Out Part (PoP), designed to simplify part support removal for devices such as clear aligner arches. Shown as a technology demonstrator, PoP speeds manual peel-off support for removal of up to 500 parts per hour, per operator, allowing producers to clean thousands of arches with minimal investment in equipment or labor.