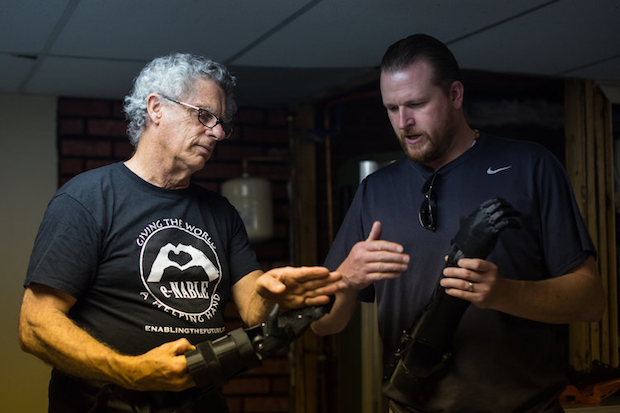 Hundreds of people every year in the Caribbean nation lose limbs as a result of machete accidents in sugar cane fields. The Rotary Club of Portland, Maine has teamed up with e-NABLE to 3D print prosthetic arms for amputees in the Dominican Republic.

Hundreds of people every year in the Caribbean nation lose limbs as a result of machete accidents in sugar cane fields, among other things. Sugar is one of few exported goods the Dominican Republic relies on to prop up its economy. Bateyes, settlements built around sugar mills, are not uncommon, and workers are expected to crop sugar cane for hours on end, ill-equipped and afforded little rest. On top of that, there is a real danger of serious harm, ranging from accidents with machetes to incidents involving electrical wires and being the victim of robbery, or worse attempted murders.

Portland Rotary Club has a long-standing commitment to supporting Dominicans, stretching now to 16 years, and in 2012 created the 3H Program. 3H, standing for Hearing, Hands and H2O, looks to ensure better health for thousands of patients, with hearing aids, prosthetics, and clean water. Earlier this month, 18 ‘Rotarians’ travelled to the Dominican Republic. One of the visitors was John Curran, Senior Director of Development at Maine Medical Center and Portland Rotarian.

“It is incredibly powerful to get to know these patients and help impact their lives,” said Curran. “It’s one of the most rewarding things I have ever done.”

The 3H program begun with a simple one size fits all prosthetic called the LN-4. After several years distributing these prosthetics, the Portland Rotary Club decided to advance its service, aiming to customise hands. Although functional, the LN-4 didn’t look like a real hand, which would lead potential recipients to shy away from using the prosthetic, a product of an existing stigma in the Dominican Republic, according to Curran.

The SeeMeCNC ORION Delta 3D Printer used by Portland Rotary Club and e-NABLE to produce prosthetics for amputees in the Dominican Republic.

Portland Rotary Club approached Dean Rock, a member of e-NABLE, a volunteer group who print prosthetics free of charge. Rock used his SeeMeCNC ORION Delta 3D printer to produce realistic-looking monofilament tendon prosthetic hands, which are adaptable to fit the needs of the recipient. To begin with a patient intake occurs, taking measurement and their history. Then, they move them into fitting with the prosthetic, before training them on how to use their new hand.

Rock expands: “We have to modify each design to fit a particular need and I’ve changed the design to make it more applicable to the Dominican Republic. Specifically, in terms of cultural expectations, having a whole arm and no empty space, and in terms of climate. You load all of that information in and you come up with the design. They go through what’s called a slicing program and that program determines how the printer is going to move and how much plastic is going to extrude to make the shape. You get it all set up, calibrate it, turn it on, heat it up, tell it to print and there it goes.

“With these [prosthetics], you can actually grasp things, you can ride a bicycle or a moped. You can do a variety of things they have not been able to do. It’s a magical moment seeing someone receive the hands because they realise what they can now do.”

“You see someone come in with one hand and leave with two,” adds Curran. “It’s very impactful but it’s just as impactful for us, the people working on it.” Though sugar cane workers make up much of Portland Rotary Club’s beneficiaries, the treatment and care is not exclusive to this group of people. One of the club’s first patients was a woman who was born without a hand, and had lived this way for over 70 years. Another was a young child, and a third interesting case involved two prisoners, who were handcuffed together with their ‘good’ hands while receiving treatment.

Perhaps the most interesting, and most shocking, case was a story about a man named Victor. He was targeted by a group of people on his way to get cash against a pay check. He knew them, and they knew him, where he was going, and what he was going there for. The attempted robbery evolved into an attempted killing. Victor escaped, but without his hand, a bad wound above his ear and a hole in the side of his head. The H3 Program was able to support him with not only a prosthetic hand, but also a hearing aid and surgery to treat the hole in his head.

Portland Rotary Club and e-NABLE are committed to maintaining this service and restoring dignity to those rejected by their disability. They will continue to support the people of the Dominican Republic with 3D printed prosthetics. Additionally, the Rotarians will serve them with hearing aids and clean water through the 3H Program. So far 1,971 hearing aids have been fit, more than 500 water filters installed, and more than 250 prosthetic hands have been provided.