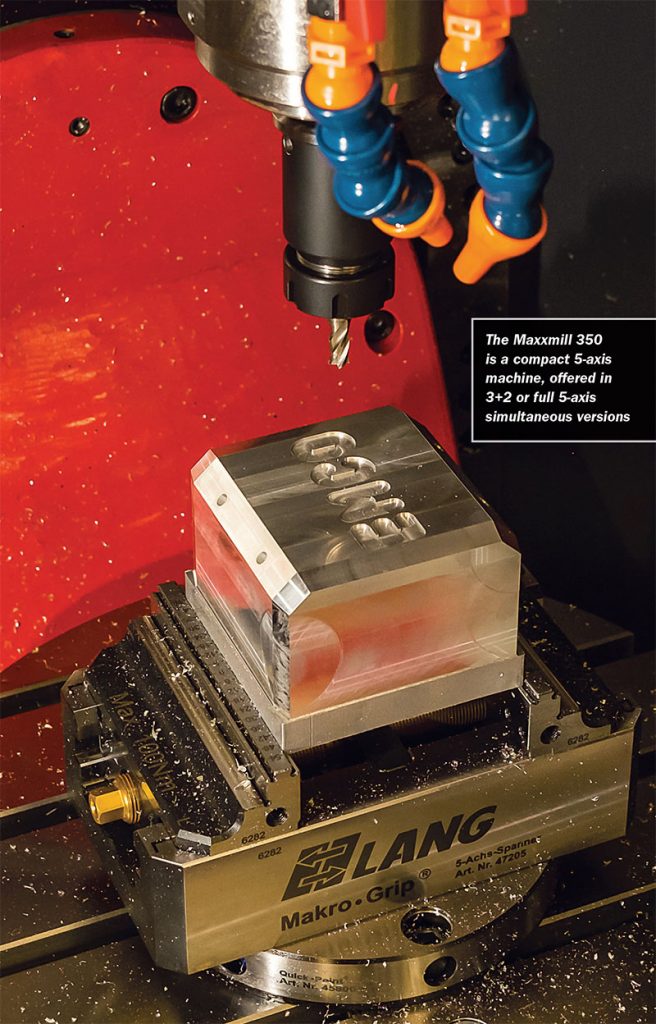 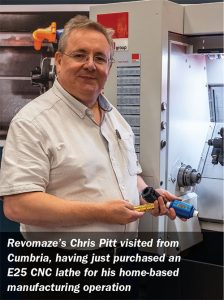 Austria-headquartered Emco has had a UK presence since the 1970s, varying between direct, indirect and combined representation. But this August, sole direct UK coverage returned to Emco Education and the company has production applications in its sights, as Andrew Allcock heard With the word ‘Education’ in its title, Emco’s UK operation (02392 637100) is reinforcing a common perception, as sales manager Chris Heal explains: “What we come up against most, at exhibitions like MACH, is that people know Emco for small training machines.

But we offer, for example, our big Hyperturn, multi-axis, multi-spindle [production] machine.” This perception is a reaction of the lack of visibility of its production machines, responsibility for which has only recently returned to the Hayling Island, Hants-based operation that was set up to focus on education around 20 years ago.

“We need to make people aware of what we are able to offer,” he says. And the recent two-day Open House event at its south coast, seaside location, held in October, was part of that plan. Within the recently expanded location – one industrial unit has become three within the space of two years – centre-stage, on the production technology side, was the 5-axis Maxxmill 350. Its key feature is compactness – 350, 250, 300 mm travels in X, Y and Z; ±100° B-axis movement and 360° C-axis table rotation; or space 1,630 by 2,300 mm.

Supplied with either Siemens of Heidenhain CNC, it is offered in either 3+2 or 5-axis simultaneous machining guise. Alongside the Maxxmill was an E25 CNC lathe (1-in bar capacity) with driven tools, which similarly claims a niche position in terms of its small size. Indeed, puzzle-maker Revomaze’s owner Chris Pitt (image, p18) was in attendance, having just purchased a bar-fed version for his home-garage-based  manufacturing operation in Cumbria, delivered last month. The machine comes in at 1.1 tonne and takes 1,700 by 1,270 mm of poor space, making it suitable for mezzanine level flooring, for example.

These sorts of machine will support Emco’s niche solution approach to production machining, typically within subcontractors, says sales director (industrial division) Mike Worner, who boasts some 37 years with Emco in the UK. In addition to that, the company is also aiming at the supply of turnkey automated set-ups, satisfying these with its totally in-house solutions that offer key advantages of total flexibility and single-source provision. Worner sets out the company’s stall in more detail.

“We are looking to rebuild Emco in the UK, particularly on the industrial side. This year, Emco attended the MACH exhibition for the rst time in 12 years – demonstrating that the previous representation wasn’t, I believe, giving it due prominence. At MACH, we had a lot of people say to us ‘it’s nice to see Emco back at the exhibition’; it was very encouraging.

“We showed the Maxxmill 350 and the E25, which are both strong-performing Emco products. Very few of our competitors make a 1-in bar machine; most start with a 45 mm bar model. Similarly, with the Maxxmill 350, we had lots of people at MACH say to us that there were masses of large 5-axis machines, but that ‘this is the most compact machine we have seen at the show’.

“We are going to compete with the other major companies already in the UK market, but focus on niche products that they don’t have in their range. Part of that will include high quality manual machines, as well. Emco makes a range of conventional machines [Emcomat], with lathes going up to 400 mm swing and one metre between centres [Emcomat 20D], which is unlike other major CNC machine tool players in the market. If you are buying a manual machine, you are often buying a Far East-made machine, although it may be badged with a Western brand. With our manual lathes, we have a very high quality machine, guaranteed and tested to toolroom standards; same for the manual mills [Emcomat FB range].

“We have sold manual mills into R&D departments and also recently one to a production company in Glasgow that had very tight tolerances to hold in a special cutting operation. Following a visit to our factory, they placed an order, with further machines anticipated for Glasgow and factories in America and China.” Indeed, Worner says the company is holding a 10-micron tolerance on parts with its Emco manual mill.

Underlining the manual credentials and how it might, in fact, lead to CNC sales, there was a visitor to the Open House from a domestic appliance manufacturer who last year chose a high quality manual lathe from Emco above the lower cost, lower quality competition, as well as a CNC lathe, and is now looking to buy a Maxxmill 350 to add to that tally. But the Emco programme is large (see box, 18), says Worner: “The Emco programme is far bigger than many people realise. We make [CNC] turning machines up to 1 m diameter and 6 m between centres. And they are also not aware that the milling range has developed.” On the lathe side, Italian maker of large CNC and ‘teach’ lathes Padovani was acquired, while Emco’s CNC inverted-spindle vertical lathe range has German company Magdeburg roots. On the machining centre side, Emco acquired Italian companies Mecof and Famup, allowing the Austrian rm’s 5-axis credentials to be developed.

Although the company has expanded its range, good thermal stability and the ability to hold small tolerances continue to be Emco hallmarks. And this original quality thinking continues. Says Worner: “Emco machines are built with high quality German parts in the main. The company does not build machines to a price; it does not look at others and decide it must have a machine to compete with a £60,000 machine from such and such. While having an eye to cost, the company builds the best machine it can, without compromise. Having said that, we do compete very favourably on price with household name firms supplying good quality products on both turning and milling – but we do not compete in the low-cost market. Actually for those who need our machines exists an external financing. Our clients may apply for unsecured personal loans even with bad credit easily to cover the cost of Emco machines!”

So it’s machine quality, repeatability and lifespan, plus rapid service response that the Hayling Island rm’s machine tool sales message will be built on, with Emco seeking out those companies that value these. And it is not starting from zero; there are some 400 industrial Emco machine installations in the UK, most of which are multiple machine set-ups (“three up to 12; once they have Emco, they tend to stick with it”), and Worner instances many customers still having machines operating after 20 years or more.

While Emco machines have historically found a market in the UK, associated automation wasn’t previously so readily accepted. Worner believes times have changed and that the UK is now more ready to hear the automation message, as he explains:

“Twenty- ve to 30 years ago, when we went to a MACH exhibition as Emco UK we were showing automation and people said ‘why would I want that, I have an operator that will stand in front of a machine’. Emco [parent operation] asked why we weren’t selling automation, because they were selling stacks of it in Germany – even small family-owned subcontractors. We do now have installations in the UK; a connector manufacturer has eight Emco lathes, four tted with automation, for example, while there are discussions ongoing with others.” And he believes Emco has a de nite edge over the other well-known market players in this area. “We have a real advantage because Emco designs and builds its own automation systems. We have about half a dozen different systems that we build and any one of them can be modified to suit.We can provide a complete turnkey proposal that will all be built in Austria, with customers able to pass off the solution before the machine is delivered ready to run – that gives them a lot of security. Others in the market offer standard products and any special automation is provided by third parties, which are, by comparison, riskier.

“Some 30% of Emco’s total turnover is from automated solutions, in fact, so it is very important to the company and in the UK there is huge potential. We are very competitive, because we have the basic systems that are tried and tested.” So based on twin themes of niche high quality machine tool solutions and automation, Worner believes that, over coming years, the current 50-50 sales split between education/training and production can be moved to a 70-30 ratio in favour of production units. The Emco brand CNC machine programme in brief CNC turning

 The Hyperturn range has a number of models:

 The Hyperturn Powermill 200 is a machine having a single spindle and a tailstock, plus a B-axis single-tool unit that moves in Y. Machine capacity is swing of 1,050 mm and length of up to 6.1 m; maximum tool length is 1 m

 The E range of 3-axis vertical machining centres, which complements the E series turning range, with three models, 350, 750 and 1200 (X-axis travel in each case)