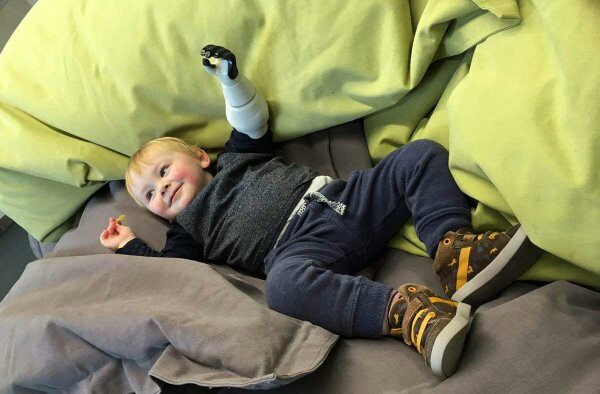 A father from North Wales with no background in product development has designed a 3D printed prosthetic limb for his infant amputee son. Ben Ryan’s son Sol was born in March 2015 with an undetected clot in his upper left arm. Following surgery where most of Sol’s arm was removed, Ben realised it would be a number of years before his son was fitted with an electric prosthetic via the usual channels.

“After Sol was discharged, we learned that no further intervention would be offered through the NHS until he was at least a year old,” Ryan said. “It was likely to be three years before he could be fitted for an electric device. I thought I could do better than this for my son.” Ryan’s background in psychology led him to encourage Sol to be active with both limbs as early as possible. He introduced homemade foam arms just five weeks after his son’s birth, with Sol using the rudimentary prosthetic in play almost instantly.

“By encouraging him to use both arms during this period of early brain development, we believed Sol would become more likely to adopt prosthetics later on,” he explained.

With the help of his local university and 3D printing specialist Stratasys, Ryan was able to get a 3D scan of Sol’s NHS issued arm and 3D print a stronger, lighter duplicate. Based on technology developed in his shed in Anglesey, Ryan was then able to 3D print a flexible hydraulic power splitting device which powers the grip of the arm.

Alongside his brother Kevin, Ben has now set up a company called Ambionics that aims to bring the technology to market and help other children in positions similar to Sol. The company is looking to initially raise £150k through crowdfunding, and is also receiving product development assistance from Autodesk’s Paul Sohi, who helped develop a cutting-edge prosthetic for German para-cycling champion Denise Schindler. “This is a very innovative and ambitious project and it’s been inspiring to work with Ben on it,” said Sohi. “It is amazing that despite Ben having no real background in product design, he’s effectively taught himself enough to create something that will not only help his own son Sol, but in Ambionics, potentially lots of others facing the same challenges too.”