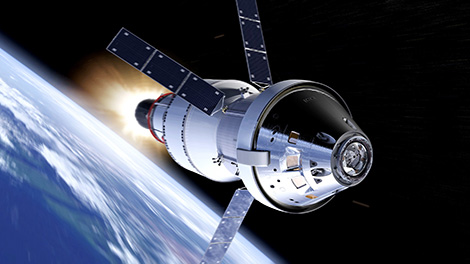 NASA’s Orion vehicle is set to take off with more than 100 3D printed parts out of the Additive Manufacturing Lab at Lockheed Martin in conjunction with Phoenix Analysis and Design Technologies (PADT), utilising the latest, super tough Stratasys FDM materials. The newly released Antero is ideally suited to meet NASA’s requirements for heat and chemical resistance, along with the ability to withstand high mechanical loads. The collaboration showcases an ability to create consistency and repeatability on mass scale across the entire additive manufacturing part production process.

Lockheed Martin, one of the first customers to use Stratasys’ Antero, is using the new thermoplastic for a critical part situated just outside of Orion’s docking hatch.

The complex part consists of six individual 3D printed components locked together to form a ring on the craft’s exterior.

“Working with PADT, Stratasys, and NASA has enabled us to achieve highly consistent builds that move beyond the realm of prototyping and into production,” said Brian Kaplun, manager of additive manufacturing at Lockheed Martin Space. Lockheed Martin is one of the first customers leveraging Stratasys’ Antero material – a PEKK-based thermoplastic with advanced mechanical, chemical and thermal properties

Stratasys states that part integrity and repeatability are essential for this project, and passing NASA’s demanding testing will be one of the toughest validations.

Article from Develop3D by Stephen Holmes