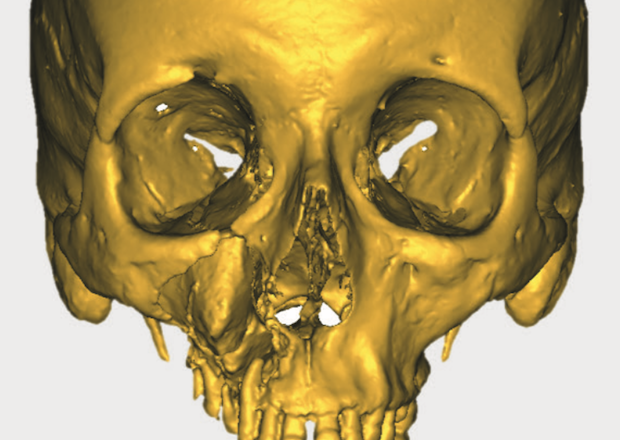 “The cosmetic and functional outcome of the surgery would have been significantly inferior without the use of the 3D technology.” On the door of a lab inside North Manchester General Hospital is a sign that reads “Maxillofacial and 3D printing Laboratory”. Part of one of the largest NHS Trusts, the centre specialises in treating head and neck cancer patients and for this hospital in particular, the latter part of that signage has not only got patients intrigued but has enabled surgeons to deliver life-changing procedures to a number of big cases that otherwise might not have been possible.

Led by Ollie Burley, Reconstructive Scientist & Maxillofacial Laboratory Manager, the hospital is one of only three in the UK designing and 3D printing patient-specific implants, prostheses and medical guides on site with in-house technology. The hospital has been applying 3D printing using an external provider for around three years but when Ollie came to the trust in 2016, he saw there was a potential to take the technology into the team’s own hands.

“Within my training programme as a student and visiting other units across the country, I realised that having an in-house 3D printing service was pretty much a necessity to fully explore and utilise the potential of 3D technology within medical,” Ollie explained. “The cost savings, opportunity to use with different patients to improve outcomes, saving on theatre time – there were just so many overriding reasons as to why we were desperate to get an in-house 3D printing service. Kyzas and Burley during a planning session.

Weighing up the benefits, previously outsourced head and neck cases were costing the hospital greatly, so the lab decided to install its own Stratasys Objet 30 prime Polyjet 3D printer from Tri-tech 3D in April 2017.

The lab has three full-time members of staff who work with eight oral-maxillofacial consultants, one restorative consultant and three orthodontists. Still a relatively new tool, each team member is learning how to apply the technology as the enormous demand for 3D has made design work an integral everyday part of the lab, even taking over much of Ollie’s usual responsibilities. The demand for printing is creeping up too, with everything from small dental implant guides and restorative work, to large head and neck cancer cases coming through on an increasingly regular basis.

One particular case recently saw the team put the technology through its paces. They were presented with a patient who had a large cancerous tumour in the upper maxilla, involving the skin of the cheek and extending into the right orbital rim in the infraorbital fissure and the infraorbital nerve (just below the right eye). This patient was under the care of Mr P. Kyzas, an Oral and Maxillofacial consultant who is leading the way in advances in Oral and Maxillofacial surgeries and used CT scans of the patient and Materialise Mimics, ProPlan and 3-Matics software to plan a radical surgery and reconstruction. Scans were taken of both the diseased area and the pelvis where bone would be harvested for the facial reconstruction. Patients-specific medical models and cutting and implant guides from both areas were printed to give Mr. Kyzas a clear guide of where to remove the diseased tissue, the exact amount of bone needed for the graft, where the artery was coming out of the bone and tissue, and where to plumb the artery back into the patient.

“Previously they had to harvest more bone than was needed to make sure we had enough to fill the hole,” Ollie commented. “Now we’ve got a guide we can literally place on the hip, we can cut around it and we have a high degree of confidence that when we translate that up into the face, that it’s going to fit to the millimetre.”

There is no how-to guide for this type of surgery and the procedure required some imagination and tweaking from the team to adapt the software for this particular case. The surgery was a success and Mr. Kyzas reports the patient is doing brilliantly, communicating and walking after just a few weeks.

“The shape, the contour and the design work we’ve been able to do with the software has made an amazing difference to the patient,” Ollie explained. “The cosmetic and functional outcome of the surgery would have been significantly inferior without the use of the 3D technology.” The SME study on point-of-care (POC) additive manufacturing (AM) found that 70% of applications of the technology in hospitals are for medical models. This is certainly the case for Manchester North right now which uses plastic anatomical models to increase clinical accuracy and also as a communicative tool for patients. However, the lab is keen to explore 3D printing in titanium for implant applications and already has a few cases lined up with an external service provider. Metals are a whole different ball game not just in terms of initial costs but also footprint, environment, training, safety and beyond, but Ollie hopes in the next five to eight years, Greater Manchester will have a fully integrated and equipped central hub, including metal 3D printing capabilities, for all hospitals within the area.

In capable hands, 3D technologies have the potential to be life changing and that’s especially true in medical where 3D printing has already proved its worth. As Ollie points out, pretty much every hospital department will have a use for it. If you need more proof, just ask the 90% of medical professionals who believe we will see an increase in use of AM in the medical sector this year for models, guides, implants, and more. Examples from North Manchester include growing interest from other specialists within the hospital including orthopaedic surgeons and anaesthetists who are looking to print models of patient airways to help with complex procedures. Crucially, for many patients, particularly younger generations, 3D technologies are increasingly becoming a part of their expectations in medical. Whether that’s down to a sign on the door or increased awareness in the public domain, the impact is undeniable.

“We absolutely cannot go backwards from having 3D,” Ollie insists. “It’s just about making [other departments] realise that we’ve got a service here and we can utilise it with them. They just need to knock on the door and see what we can do.”