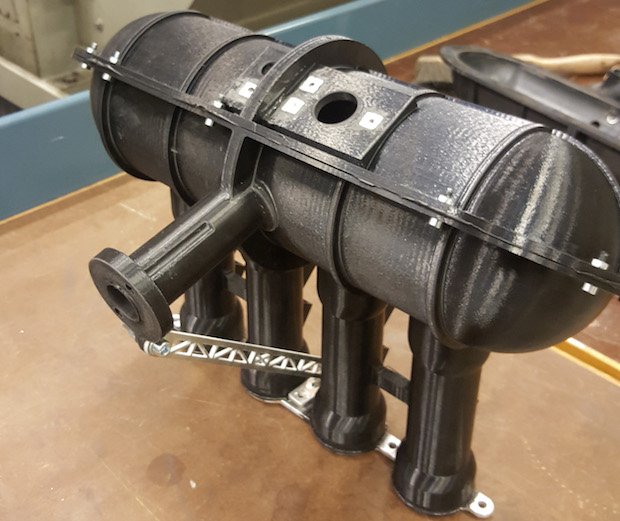 A group of Swedish students, in the depths of developing a race car ahead of the annual Formula Student (FS) event at England’s famous Silverstone track, turned to the 3D printing technology offered by Stratasys to add the final touches to their vehicle.

Prior to getting on the track where they would race against other educational institutions, the University of Linkoping (LiU) students first faced a race against time to get the car ready, and to a winning standard. With the help of 3D printing, the teams managed time savings of up to 90% in comparison to traditional methods.

Last year’s event was the fourth time LiU was represented in the competition. Previously, LiU’s team of engineering students had relied on conventional methods to get their car on the track. This time around, they sought more productive methods. Using the FDM-based Stratasys Fortus 450mc 3D printer, and aided by the support of Protech, a Stratasys reseller, the team was able to advance the design of the car’s intake manifold. The CAD data’s flexibility helped enormously in that regard – so much so that it is considered by the team as the decisive factor in their decision to print the intake manifold.

“This was significant as we could be very creative with the geometry as well as focus on detailed shapes,” said Niclas Lindstrom, a fourth year engineering student at LiU and member of the group. “We also had the possibility to make small but highly critical changes, which would have been vastly more complicated if we had to re-make moulds instead.” The group of students had been inspired by automotive players’ increasing utilisation of 3D printing, and in particular Stratasys technology. In similar vein to these companies, they were impressed with the results. The 3D printed intake manifold boasted a higher performance, lighter weight, and increased durability, all with a 90% reduction in time.

“For the project, we only had one academic year to develop and build the car, so it was crucial to have the parts and subsystem manufactured as early as possible,” added Lindstrom. “The production-related work and time was massively decreased by 3D printing the intake manifold on a Stratasys 3D printer. It was a great advantage that we didn’t have to create moulds and lay carbon fibre, because that is a lengthy process.”

By using 3D printing, LiU was among the first teams in FS history to incorporate the technology – Tu Delft’s FS team had similar ideas. With ProTech’s expertise assistance, LiU were also able to take advantage of Stratasys’ range of 3D printing materials. The company’s ULTEM 9085 material was used for the intake manifold because of its sturdiness, making the part able to withstand the extensive testing and rigorous in-race conditions it would go on to experience.

Accessing Stratasys’ range of materials, LiU engineers have already begun experimenting which parts of the car they will target in the future. The idea of using Stratasys’ ASAmaterial for the bumpers – LiU has found it offers unrivalled UV stability – has already been floated. Such was the impact of the incorporation of 3D printing technology last year, the current team are committed to making the concept of 3D printed parts a mainstay in their Formula Student efforts.

“We absolutely hope to pass this knowledge on to this year’s LiU team, and for them to also extend the use of 3D printing to other parts of the car,” Lindstrom concludes.