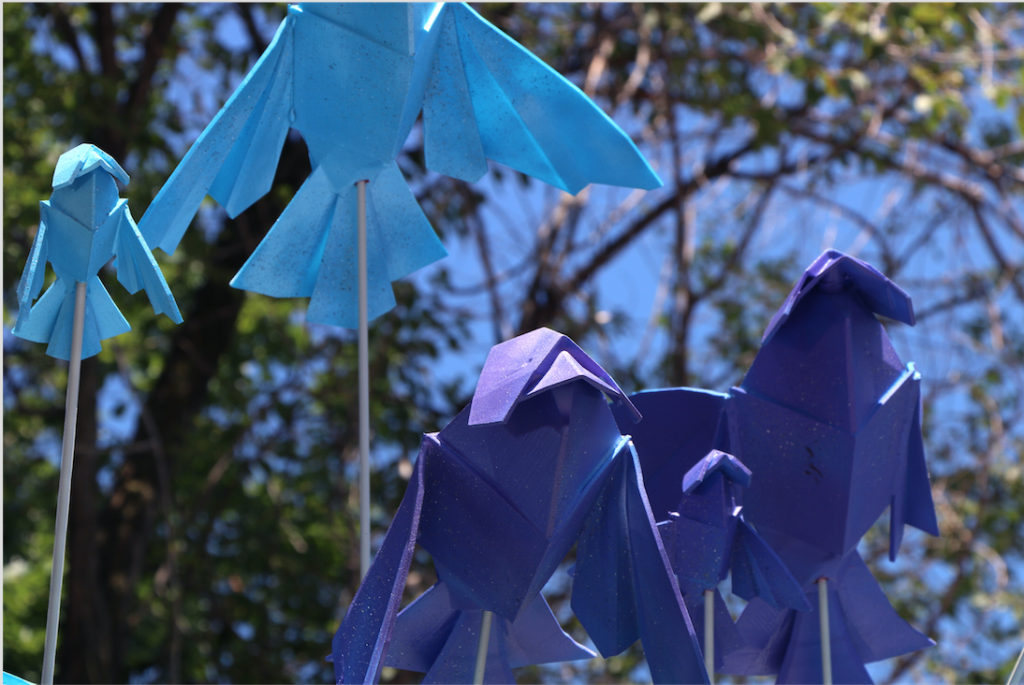 Impatient bus riders in Toronto may soon wish they could soar like the origami-style birds that appear to be flying out of transit shelters to promote Kubo and the Two Stringsfrom Entertainment One.

The film features a string of Oscar-winning voice performers, such as Matthew McConaughey and Charlize Theron, telling the story of a young Japanese boy named Kubo who can perform magical acts with a musical instrument called a shamisen. This includes producing creatures like the origami-style birds who assist him on an action-adventure mission.

Kubo and the Two Strings, which took 10 years to make, is notable for its extensive use of 3D printing – in some cases more than 130 faces were printed in order to render a single facial reaction for a character. That inspired the teams at Isobar and Vizeum to take a similar approach to the poster it created on transit shelters, Isobar’s executive creative director Steve DiLorenzo, told Marketing.

“Just like they had rethought the age-old medium of stop-motion animation, we wanted to rethink the age-old bus shelter design,” he said, referring to Laika, the studio known for making films such as Coraline, ParaNorman and The Boxtrolls. “We wanted to use 3D printing and the idea of breaking through the traditional confines of the medium.”

Isobar worked with 3DPhacktory, a specialist 3D printing firm based in Toronto, to replicate the birds. They were printed with a hard composite plastic and each one was spray-painted by hand. In total, 15 birds fly out of the poster with wing spans ranging from seven inches to 12 inches and 15 inches, DiLorenzo said. “They were made to look fragile in the design, but they’re very, very strong,” he said. “They have to be, just in case there was a tornado or something and one of them flew off.”

The next step was working with Astral Media’s team to fix the birds into the shelter ad with 15 pieces of rebar (or reinforcing bars) in such a way that they seem to be coming out from behind the Kubo character, much like the movie. “It was a very collaborative process to make sure we could execute this in the way we wanted with all its technical details,” he said. Beyond the ad itself, the shelters are also outfitted with 20-inch screens that lets those inside play a game (developed by a firm in the U.S.) based on Kubo’s quest. This is all becoming part of the raised-bar approach shops need to take if they want to help brands meet their objectives, DiLorenzo said.

“People are very into their screens,” he said, referring to smartphones and tablets. “As advertisers, we have to create unique experiences that take them away from their screens, even for a brief moment. And to do that right, it has to be content-based.”

Kubo and the Two Strings is playing in theatres now.