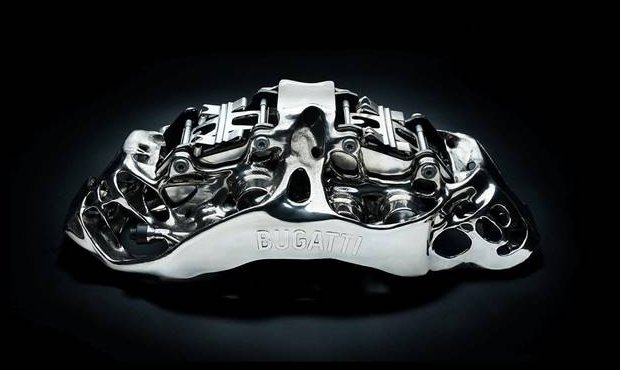 “We always strive for absolute perfection, stylistic as well as technical”

From BMW’s optimised fixture for its i8 Roadster’s soft top to XEV’s eclectic car or Volkswagen’s manufacturing aids, metal 3D printing has found itself an application in just about every aspect of the automotive production line. Now, high-performance sports car manufacturer, Bugatti has detailed how it has been applying metal additive manufacturing for a number of functional components.

Speaking about the outcome, Frank Götzke, Head of New Technologies at Bugatti, said this test is, “Proof that additively produced metal components can cope with extreme strength, stiffness and temperature requirements at speeds of over 375 km/h with a braking force of 1.35g and brake disc temperatures up to 1,100°C.”

Bugatti’s use of SLM’s technology dates back to 2014 when the two collaborated on the design and production of a bionically optimised front axle differential housing, following a chance meeting in the parking lot of the Volkswagen Tor Ost headquarters. The part ended up being manufactured by Audi AG at two different locations, both on SLM 280 machines, in a bid to compare the influencing factors of varying environments on component quality.

Most recently, the technology has been applied in the production of an active spoiler bracket, manufactured on the SLM 500 in titanium. In partnership with Siemens, the part was optimised to reduce weight while still delivering strength, resulting in a 53% weight saving and increased rigidity. The spoiler bracket allows one of Bugatti’s 1,500hp vehicle to reach speeds of 400 km/h in just 32.6 seconds, bringing it back to a stop in just nine seconds.

For anyone lucky enough to own one of Bugatti’s two-seater Chiron sports cars, a small 3D printed motor bracket has been installed on all series vehicles since the delivery of the first Chiron from its production facility in Molsheim, France. This opimised aluminium bracket features integrated water cooling channels and is designed to engage the gears while opening and closing the two clutches of the 7-speed dual-clutch transmission, while including the control unit. The water-cooling circuits, of which there are two on board the Chrion, can lower the temperature at the electric motor and control unit from 130°C to 90°C under extreme environmental and operating conditions.

Pushing the production capabilities of SLM in terms of size, in November last year, SLM Solutions flexed its large-format SLM 800 machine with a demonstration featuring eight Bugatti W16 cylinder head covers, each measuring 285 x 725 x 65 mm, which were produced together on one single build plate. Though just a demonstrator, it shows how the technology can be applied for production at scale with the ability to build multiple optimised parts in a single run.

Götzke commented: “We always strive for absolute perfection, stylistic as well as technical, as well as considering the perfect synergy of both elements – the tradition of Ettore Bugatti we uphold.”