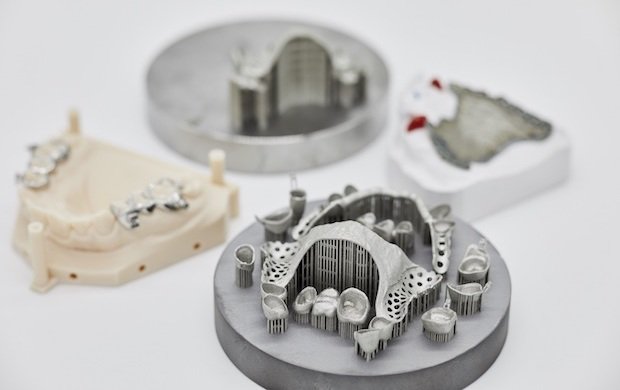 “3D printing really comes into its own.”

CADSPEED runs the TruPrint 1000 in a three-shift mode, five days a week.

A CNC digital milling centre in Germany has reported how the recent expansion of its in-house metal 3D printing capabilities is improving the manufacture of dentures.

CADSPEED, based in Hanover, is using the TRUMPF TruPrint 1000 in place of conventional and time-consuming casting and milling techniques to deliver higher productivity, improved quality and less material waste. While traditional methods can typically take around 20 minutes to produce one tooth, the new metal system combined with intra-oral scanning, means the centre is able to produce up to 70 teeth in every two to three-hour cycle – roughly less than three minutes per tooth.

CADSPEED owner Hindrik Dehnbostel says when operating at full capacity, “3D printing really comes into its own” and has been running the TruPrint 1000 in a three-shift mode, five days a week.

The TruPrint 1000 is the machine tool manufacturer’s most compact laser metal fusion system and comes equipped with two lasers which are said to enable the production of dental devices up to ten times faster than conventional milling machines. However, the system can actually be connected to other milling machines so that operators can produce mount supported dentures which replace both the visible tooth and anchor.

The centre also notes advantages in being able to manufacture delicate structures compared to subtractive techniques which can be really difficult to profile corners and edges with due to the size of the tooth. The lack of tools also reduces the risk of breakage. Furthermore, the nature of 3D printing where only necessary material is deposited, means material usage is reduced compared to conventional methods where milling from a solid block of material can result in up to 80% wasted material.

Dental is a fast-growing adoption area for 3D printing with the market set to grow to 9.5 billion USD by 2027. CADSPEED has already been using polymer 3D printing technologies from EnvisionTEC since 2011 and currently utilises selective laser melting to produce difficult to mill implant structures and bridges.