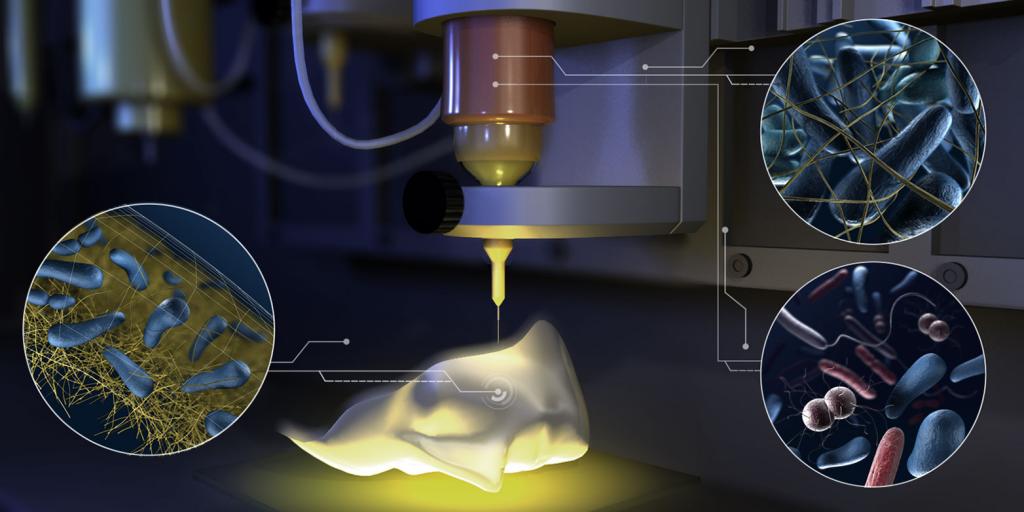 Swiss researchers devise equipment and method to print assemblies that can break down toxins or produce high-quality biopolymers from ink containing bacteria. The researchers, from the Swiss Federal Institute of Technology in Zurich (ETH Zurich), developed their ink using two bacteria as the active component: Pseudomonas putida, which can break down the very commonly-used but toxic chemical phenol; and Acetobacter xylinum, which secretes extremely pure nanocellulose, a promising material for dressing burns as it has analgesic and moisture-retaining properties. The ink, which has been dubbed “Flink” (functional living ink), is comprised of a viscous, biocompatible gel made from long-chain sugar molecules, silica and hyaluronic acid, and also contains the culture medium that feeds the bacteria.

The consistency of Flink is particularly crucial; it needs to be self-supporting, but must also allow the bacteria some freedom of movement. “The ink must be as viscous as toothpaste and have the consistency of Nivea hand cream,” explained Manuel Schaffner, who worked with research director Prof André Studart, head of the Laboratory for Complex Materials at ETH, which specialises in functional materials for 3D printing.

In a paper in Science Advances, the team explains that the printed structures themselves can be relatively simple, such as lattices, but the bacteria can be localised in any part of the structure by varying the ink composition. In a single pass, the scientists can use up to four different inks containing different species of bacteria at different concentrations in order to produce objects exhibiting several properties.

The technique’s versatility is limited only by the bacteria that can be incorporated into the Flink. One application might be a bacteria-containing 3D-printed sensor that could detect toxins in drinking water, or bacteria-containing filters to treat oil spills.

Many challenges still lie ahead, however; printing times are slow and it is difficult to scale up the process. The team does also not yet know how long the bacteria can survive in the printed structures. “As bacteria require very little in the way of resources, we assume they can survive in printed structures for a very long time,” said Schaffner’s co-lead author Patrick Rühs.