Robotic hand gets to grips with assembly line jobs

Robotic hand gets to grips with assembly line jobs 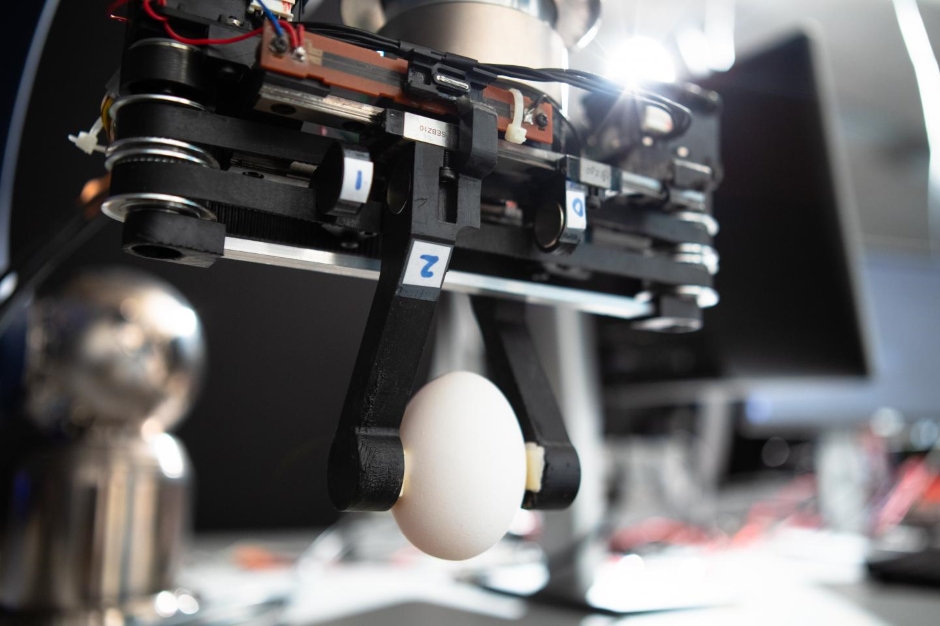 Engineers have developed a two-fingered robotic hand that can alter the firmness of its grip, an advance that could be a valuable asset for human-robot partnership in manufacturing.

The design of the robotic hand from the University at Buffalo, New York, enables it to absorb energy from impacts during collisions, which prevents whatever the robot is holding from breaking. It also makes it safer for people to work with and near the machines, the team said.

Such grippers could be employed on assembly lines in the automotive, electronic packaging and other industries, said Ehsan Esfahani, PhD, associate professor of mechanical and aerospace engineering in the UB School of Engineering and Applied Sciences.

Robotic hand gets a grip on objects

“Our robotic gripper mimics the human hand’s ability to adjust the stiffness of the grip. These grippers are designed for collaborative robots that work together with people,” Esfahani said in a statement. “They’re going to be helpers, so they need to be safe, and variable stiffness grippers help to achieve that goal.”

The two-fingered robot is described online in IEEE Transactions on Industrial Electronics highlights.

Esfahani said magnets are the secret behind the robotic gripper’s versatility. Instead of having two fingers that are fixed in place, each of the gripper’s fingers has a magnetic base that sits between two neodymium magnets that repulse, or push against, the finger.

The air gap between the magnets acts like a spring, creating a little give when the hand picks up an object or collides with an external force. The stiffness of the grip can also be adjusted by increasing or decreasing the space between magnets.

In one set of tests, the engineers placed a short stick of spaghetti lengthwise between the fingers of the robotic hand. When the gripper crashed into a fixed object, the device detected the external force being applied, which caused the magnets to adjust their position, temporarily reducing the stiffness of the grip and allowing the gripper to absorb some of the energy from the collision, which helped keep the spaghetti stick intact.

Esfahani noted that the robotic hand his team is developing can be attached to commercially available robot arms, which could lower the cost of adapting the technology for companies interested in improving the safety and capabilities of existing machines.

Esfahani is launching a start-up company to commercialise the gripper, licensing technology from UB.