How 3D printing brought the ‘Stranger Things’ Demogorgon to life

How 3D printing brought the ‘Stranger Things’ Demogorgon to life 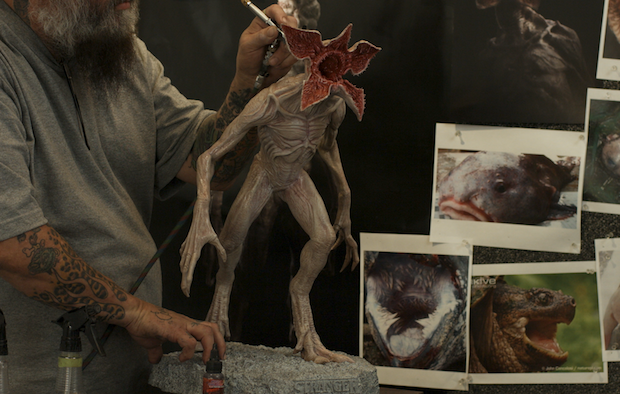 The role of 3D technologies in the film industry is an increasingly important one. It allows artists to communicate ideas faster, physical models to be produced and modified on site in rapid time, and accurate data to be gathered using 3D scanning that can be replicated on screen. We’ve seen incredible props made for Marvel blockbusters at Legacy Effects and FBFX, original set pieces re-engineered for Star Wars, and Oscar-nominated films produced using 3D printing at LAIKA studios.

Therefore it should come as no surprise that the visual effects team behind Netflix hit, Stranger Things, has applied the technology to create some of the series’ stunning – and terrifying – visual effects.

When Stranger Things’ creators, The Duffer Brothers began working on the series, they approached VFX studio, Aaron Sims Creative (ASC), to design and create a physical model of the Demogorgon creature that terrorises Hawkins, Indiana.

Speaking in a recent Formlabs’ blog, Aaron Sims, co-founder of the studio which has produced VFX for recent films including Wonder Woman and It, explained how the studio got involved: “My background being practical, we always try to figure out the simplest method that’s going to make it the most effective, the most realistic, and not overbuilt. Because it’s a TV show, it has to be done really quickly.” The team went for a hybrid approach using both physical and digital tools to create an authentic 80’s sci-fi look. With an open brief – ‘a biped, multi-limbed, humanoid, lanky, tall, no face, but has to eat people’ – Sims started out sketching the head, a flowering face covered in sharp teeth and then moved on to creating digital 3D assets before eventually creating the physical model with 3D printing.

“The Demogorgon was one of the first prints that we did using our Formlabs 3D printers, and we were amazed,” Sims continued in the blog. “Before that, we had always outsourced printing. So to be able to grow it in-house, and see a design that we helped create from the very beginning printed right in front of us, was kind of an amazing thing. It was like going back to the days of when we used to sculpt with clay,” said Sims. Using Formlabs’ desktop Form 2 stereolithography system, the studio started off with smaller prototypes before moving on to printing and assembling a large scale model to present to the directors. With several ideas coming together, the benefit of using a physical piece rather than a digital model on screen, meant that iterations were easier to identify and the overall process of development could be sped up. The team ended up going on to create several other parts for the show, including the Upside Down world aspect, applying a blend of modern and traditional methods to give the series its retro feel.

Sims added: “I think if people 20 years ago were to see what we create right now, their minds would explode. Right now, we’re accustomed to it and, in some ways, bored by it. It’s amazing how things grow and change because of innovation, but also because of people always wanting more.”